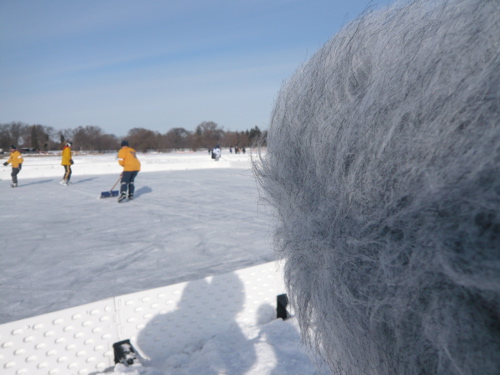 The U.S. Pond Hockey Championships took place this past weekend in Minneapolis, Minnesota.  Over the course of the weekend, thousands of players hit the frozen ice and breathed in the frozen air.  It was -5F or colder for most of the tournament.  I don’t have much hockey sounds in my library, so I thought it would be a good time to freeze my ass off for some decent recordings. I dragged my buddy Mitch Hanley along so I wouldn’t be the only one with frostbite at the end of the day.

Before games each team had to shovel their own rink to the get the ice game ready.  No Zambonis in this crowd! 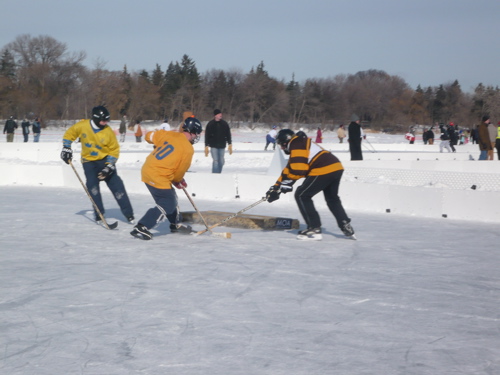 The teams play without goaltenders on a much smaller ice surface and instead of a traditional goal they have to shoot the puck into two small holes on either side of a wood rectangle.  It is not easy. Listen for that puck banging into wood sound.

While recording I played around with various perspectives. First, I tried a stationary perspective along the center line of the ice, and then hand held the rycote to track the action.  I posted the tracked action below.

It was a challenge to stay warm and not introduce noise through my giant extreme cold mittens.  I learned how quickly your hands can get cold if you don’t move them inside the gloves.  There were other noise hazards to watch out for.  I had to be very careful not to crunch snow with my boots once we began rolling. I was concerned about how my Sound Devices 744 recorder would hold up in the cold and it performed perfectly.  The only issue I experienced was diminished battery life from the lithium-ion batteries, but I expected that.  I had a bag full of spares to keep me going. The one bit of noise that I couldn’t control was airplanes flying over the lake throughout the day. Unfortunately, Lake Nokomis is right in the flight path of MSP.  If you are into that sound there are plenty of houses right around the lake.

Recording Geek Note:  Rig consists of Schoeps CMC5 setup for MS, with the MK4 as the mid.  It was all tracked to a Sound Devices 744T at 24/96.  Everything was really cold. 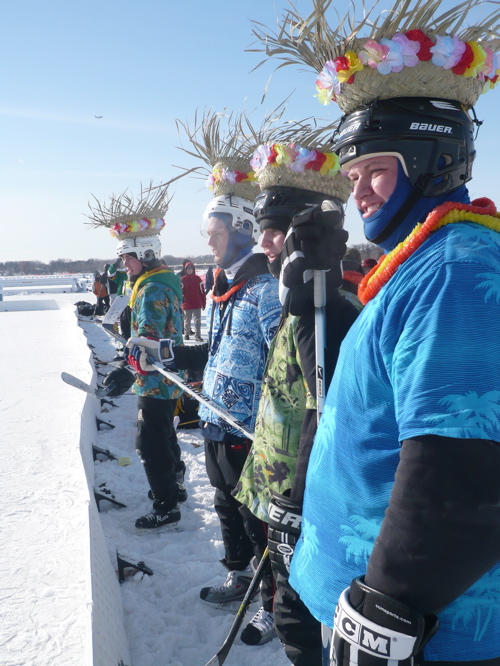 Some of the more unconventional uniforms.  I thought these guys might be the Hawaii team, but they were from a suburb of the Twin Cities. 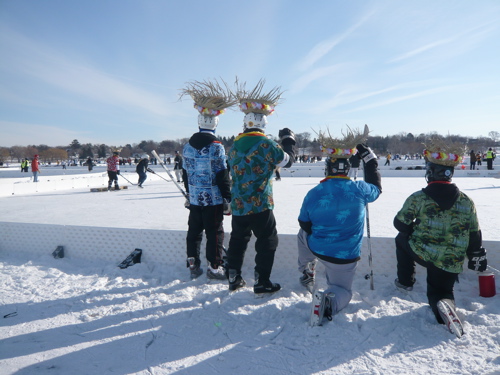 Waiting for their shift. 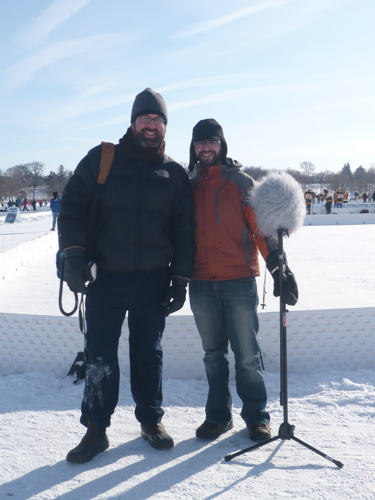