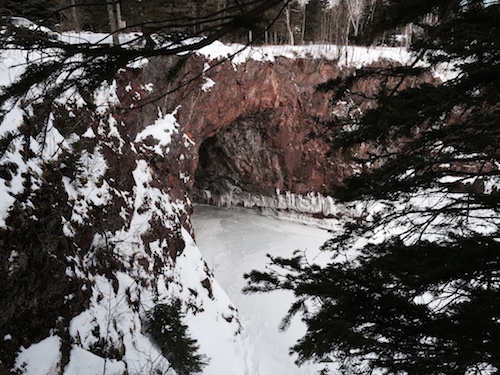 I recently helped my pal Kelly Pieklo with some custom recording work, and I’ve asked him to blog about some of the work. – Michael Raphael

In the past, Eric and I have collaborated as director + sound editor a few of his other projects, including his 2009 short film “Ana’s Playground”, and most recently a series of effective and touching American Cancer Society broadcast spots. Michael and I have worked together numerous times on various Rabbit Ears Audio’s recording projects, including REA’s Mi–24 Hind and Jet Turbines collections, and as a result I have come to have great respect for his recording rig, his attention to detail while recording and his understanding of perspective.

“Strangers” was shot at a beautiful home in Silver Bay, MN, up on the craggy, dramatic cliffs overlooking Lake Superior’s shore. It is a lovely, but lonely and eerie area in the winter months. Few sounds other than approaching and passing 18 wheelers on HWY61 and the violent wind gusts blowing off of the lake. After reading the script, looking at some storyboards and viewing some of the production photography, I found myself focusing on the home itself, the shelter and environment it provides.  The outdoor principle photography looked great – plenty of opportunity for winds, gusts, water sounds (Superior was still open water in Jan), tons of snow foley footsteps, some water splashing around, maybe some hydrophone recordings. After seeing some early edits, I found myself thinking of DP Bo Hakala’s sweeps through the softly and darkly lit, angular layout of the living spaces of the home and wanting to explore supporting the storytelling through the use of native, true sounds of those ambiences and environments.

The results of the 2 interior recording days up north were phenomenal. The amount of movement, change, and dynamics in the room tone recordings was stunning – never am I in a real world situation where I am listening to, and ultimately totally focused on, the morphing of the sound of a room over time: distant HVAC ons/offs, mysterious ductwork knocking sometimes syncopated sometimes randomized, building material expanding and contracting, the exterior environment interaction with the exterior of the building and the sound of that interaction from the interior perspective. During the editing of the tones, various emotional moments made themselves noticeable – fear, sadness, aggression, lust, confusion, clarity, relief, safety.

We managed to find those extremely special, emotional recorded moments and make them available for Eric and “Strangers”. We’re excited to hear the results, and wish Eric and his crew the best with this project!