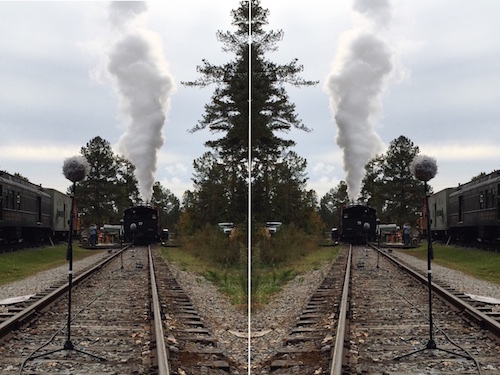 I have a tremendous ability to get obsessed with projects and go down the rabbit hole. In this case it is a massive collection of steam whistles and culminates in the release of REA_017.

I first got the bug when I went to go record the amazing new year’s celebration over at The Pratt Institute in Brooklyn.[1] That night was magical for a number of reasons. Who doesn’t want to hear steam whistles in Brooklyn? And who even thought that is still possible? Conrad Milster, Pratt’s Chief Engineer, puts on this massive celebration and he is a real gem of a human being. I managed to get out to Pratt in 2012 for the event, and I was truly enamored. Conrad was kind enough to blow some whistles early in the evening before any of the festivities started:

Notice the car rolling by at 20 seconds in. You can’t hear it at all. You learn quickly that when a​ steam whistle​ blows​ it is really damn loud and puts out an​ ​extreme amount of pressure. An 18-Wheeler ​can roll ​by and it ​won’t be heard. The whistles output the kind of pressure you feel in your chest​ -​ the kind of pressure that yells “bring hearing protection!”

From that moment on I was on the hunt. It is relatively easy to find whistles but​ it is considerably more difficult to find a steam boiler to feed them. Not every whistle collector has a steam boiler or steam train in their backyard.

In 2013 I started conversations with my friend Rudy Trubitt, head of audio at Lionel about a collaboration. Rudy is always looking for new material and he also has close ties to the railroad community. After some exhaustive searches Rudy made contact with The New Hope Valley railroad in North Carolina.

New Hope Valley set several days aside so I could come down and record. We ended up recording an insane amount of whistles on Saturday from 4pm until about 11pm, and then the next morning from 8am until about noon. The location couldn’t have been more perfect.

The New Hope Valley Railroad is in a rural part of North Carolina, the tracks are set back from major roads, and it is surrounded by tall trees. Those tall trees created some truly lovely reflections for the tails of the whistles. The only thing better would have been a massive canyon, but those are a bit harder to find on the east coast. The only interference​? ​ An ​oc​c​asional cow moo.

Steam Whistles are challenging to record not only because of the high amount of sound pressure level they output but because of the diversity of sounds that need to be captured. We made sure the whistles were performed in a variety of ways and captured 6–8 perspectives per take. The iconic sound of a steam whistle heard in most films is a distant perspective. I wanted to make sure we captured those extremely well, and also provide some creative room for sound designers to play.

Some of the closer perspectives are unusual: you can hear the sound of air being ripped. The diaphragm is also on the edge here as well.

My favorites are the takes from the figure of 8 microphones which are completely off-axis with no proximity effect.

Many thanks go out to Rudy Trubitt, Justin Drust and Kelly Pieklo for their help and support with this collection.