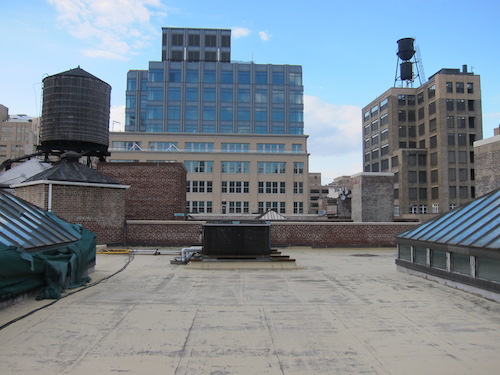 It’s been a few weeks since I’ve accidentally blown my ears out listening to the tails of rocket motors. I love those recordings, but boy am I glad I get to take a break from editing them. I had a terrible habit of forgetting to turn the headphones down when I was checking the tails of each rocket motor burn. Ouch!

Now that I am free of spontaneous combustion, I can return to working on my other obsession: nyc rooftops. Recently, I had two experiences that couldn’t have been more different. The first location was a rooftop on a building that was 8 stories high in Soho. When I first looked at the address on the map I thought it was going to be a great location for distant traffic and sirens in Soho, but it turned out to be an HVAC paradise:

The roof is surrounded by 4 foot high walls and several HVAC units kicking on and off. Occasionally, muted cars and brakes can be heard through the din of the HVAC. It’s those indirect sounds that sound like NYC. If you have ever spent time in NYC during the summer, you know the sound of Air Conditioning units running around the clock. New York during the summer contains the smells of stale garbage cooking in the sun and the drone of freon.

Another recent rooftop session took me to a 7-story building on the East Side to a deluxe apartment in the sky:

In this case there were no massive HVAC units, but instead a quiet street between 1st and 2nd Avenue in the 80s. The bustle of 1st Avenue can be heard off in the distance with minimal traffic rolling by directly below. Beans might not fry on the grill if you are on the East Side, but the distant traffic sure does sound good.