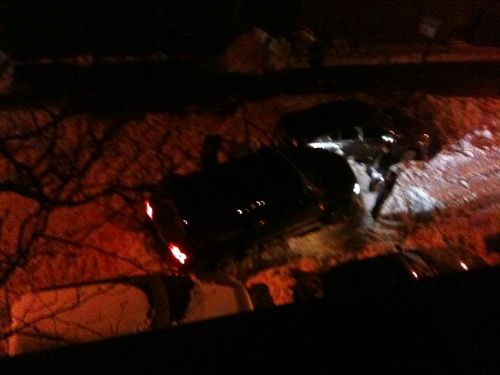 December 26, 2010 will be a date that lives in infamy for many New Yorkers – not because we were struck with a blizzard just after christmas, but because the city responded poorly when it came to its cleanup. There are countless stories of New Yorkers abandoning cars, getting stuck on subways, and trudging through unplowed streets for days.

A week has passed since the storm, but the response to it has not. There have been tons of crazy news stories and lots of inspired videos like this and this.

There are also many stories of New Yorkers helping other New Yorkers dig their cars out to get to safety. The missus and I were out of town on the day of the big storm, but returned Tuesday evening to find our street unplowed and plenty of drivers getting stuck on it. One of the first victims after we returned home, was a Lincoln Navigator that appeared to only have rear-wheel drive.

After the driver spun his wheels into a deep hole, a few helpful (or so we thought at first) neighbors on the block swooped in to dig the driver and his passengers out:

After a short while, it got a little ugly . . .  I got inspired to throw my DPA 4060s out the window when helpful guy #1 started yelling. The bickering between helpful guy #1 and and helpful guy #2 went on for hours before the guys in their car decided to go it alone. They eventually made it out when two other good samaritans showed up to help.

Recording Geek Note:  Recording rig consists of a pair of  DPA 4060s hanging out of a Brooklyn window tracked to a Sound Devices 744T