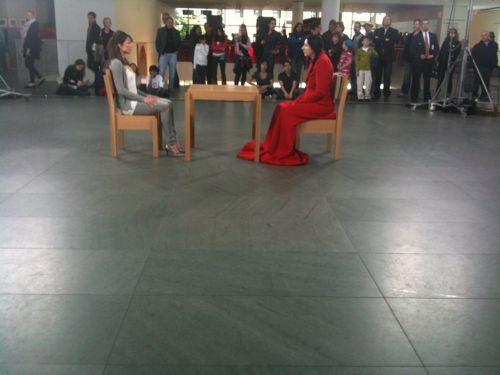 Today’s post is a cross-country collaboration of field recordists, myself (Mr. Fieldsepulchra) and Nathan Moody of Noisejockey.net. We’re simultaneously posting recordings from our respective museums of modern art. I visited the MoMA in New York City, and Nathan visited SFMOMA in San Francisco. You can read both posts to compare and contrast the recordings and our observations

I traveled to MoMA last Saturday to do some recordings and it was packed! I was hoping for people, but I got a little more than I bargained for. I soon realized that the crowds were not only due to the weekend visitors and tourists, but also due the Marina Abramovic’s retrospectic. Ambramovic is a Serbian performance artist who has been working since the early 1970s. There are a number of her works being performed, but the one that folks are lining up to see and participate in is a piece called “The Artist is Present” which is also the title of the exhibition. Abramovic, dressed in a floor-length red dress, sits in the atrium and performs her new work for seven hours, five days a week. She sits without moving in a chair at a table and visitors are invited to sit silently across from the artist for as long as they like.

Yes folks, this is art with a big “A.” When I was there someone was just completing a session across from the artist that ran about 45 minutes, and another individual lasted over an hour.

I decided to do most of my recording in that main atrium space because there was such a diverse crowd gathering. Back in 2004, MoMA opened its newly renovated space, which included a 6-story atrium. The atrium initially drew some ire because the wide open space dwarfed some of the art. That same space also dwarfs sounds and there is a constant din of garbled voices that keep folding into each other.

I also decided to record in the main entryway where folks gather to buy tickets and check their bags. There were long lines and because of the smaller dimensions of the room accents and voices are much more apparent. It is easy to forget the diversity of language and accents in New York, but the MoMA on a Saturday afternoon has it all!

I could have done a bit better with the planning and execution of the recording. I was told to check my backpack, so it was lucky that I had gone out with my smaller kit, which included the Sony PCM-M10, DPA 4060s, and a Sound Devices MP-2 mixer neatly packed away in a waist pack (known to some as a fanny pack). After I checked my backpack, I scurried off to the men’s room where I strapped the waist pack on under my jacket and ran the DPA’s through the collar of my jacket. I was initially planning to mount the mics on my bag’s shoulder straps and I usually use a hat to hide the mics, but my bag was checked and I forgot the hat at home. Note to self: always bring the hat. Luckily, threading the mics through the collar of my jacket worked fairly well. The first half of the recording is from the atrium and the second half is the entry way.