Last week I posted a bit of road construction going on in Manhattan and one of my soundie pals in Minneapolis, Kelly Pieklo got in touch with some demolition recordings he had done the same week. I guess soundies and road crews think alike. Here’s a guest post from Mr. Pieklo: 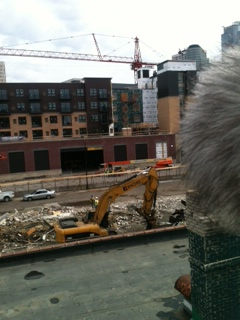 The neighborhood around our facility has seen a pretty big uptick in construction over the last 18 months. This has provided many opportunities to capture not only the general sounds and cacophony of construction worksites, but also engines of earth-moving machines and the sounds made when using these vehicles.

Recently, however, the building immediately next to ours, Merit Printing – a one-story brick facility – was sold, and was to be demolished for new construction.The demolition took a total of about 4 days, and I managed to get outside for about 3 of those days to record.

It was nice to hear less of the machines, which I was concerned would overpower the recordings, and more of the sounds of the dropping, knocking over, and scooping of various building materials – wood, brick, concrete, glass block, and metal. I think I appreciated most the sound of a wall of bricks tumbling over. Additionally, unlike the stereotypical wrecking ball demolition I was (sorta) hoping for, the bringing down of the building had to be carried out very carefully, as our facility and Merit were very, very close. Very few large crashes, and many more smaller, controlled crashes.

The wood sounds you hear are the sounds of the crane digger operator carefully pulling the wood framing away from the concrete walls by using the digger’s bucket. I was amazed at the precision of the operator in these situations – it took a very gentle touch to pull these small pieces of wood without simply knocking the entire wall over. Most of the glass breaks are glass blocks, which sound far different than panes of glass – almost like clay bricks with some higher tone resonances.