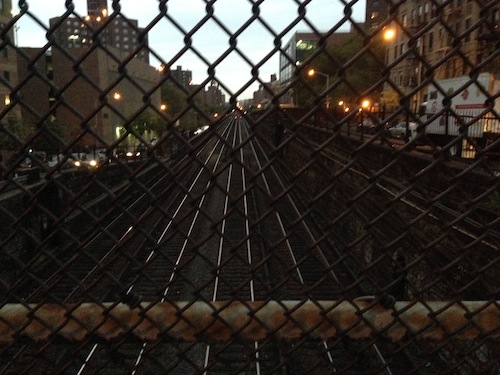 I’ve been working like a dog lately, which has limited my extra-curricular productivity. If you read this blog regularly, you know that one of my passions is getting out and recording. I love being forced to stop and really listen to what is around me. This happens during the act of recording and it happens again when I have the pleasure of playing the content back over and over again.

One solution to this problem is to stay close to home when recording. I live in New York City, so the recording possibilities in my backyard are limitless. When you live here it becomes very easy to take it for granted, but I’m trying to change that tendency.

A few weeks ago I was on the Upper East Side and happened upon the Metro North Park Avenue Tunnel. It is the where the trains heading to and from Grand Central pass through. If you commute on a train north of NYC odds are you pass through the tunnel every day.

There are four tracks where trains move past each other at different speeds and the sounds build when they reflect off the neighboring buildings. I used my stealth setup on these recordings, because I was nervous about standing in the middle of Park Avenue right over a major transit hub in NYC with visible microphones. I did not want to attract that kind of attention. I’m glad I was forced to take out the DPA 4060s because I was reminded of how good their low end response is. Those little mics pack a serious punch.

Recording Geek Note: Rig consists of was recorded with a pair of DPA 4060s tracked to a Sony PCM-M10 with a Sound Devices MP–2 as a front end.