I’m currently in the process of building a new SFX library over at Rabbit Ears Audio. I’m not exactly sure what I’m going to call it, but the focus is jet propulsion. Most recently, I connected with some folks who build their own jet turbines. I love hobbies! Some people knit, some people play racquetball and some people build jet turbines.

One of the highlights of the session was this jet bike 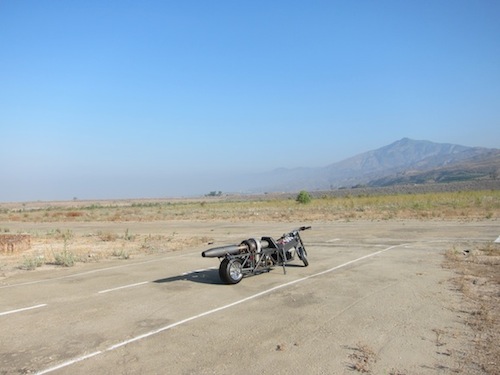 This jet bike was completely built buy a hobbyist in his garage over a 5 year period. It is quite a remarkable feat and as you can hear it is quite a powerful sounding machine.

The above recording was made from a distant perspective and it is still incredibly loud. Early in the day we set up the bike for some stationary runs of the turbine and afterburner. There was also a decent sized hill behind me which added some nice reflections. You can hear the engine being ramped up and the pops at the end is the sound of the afterburner being punched in.

I’m still completely floored that this was assembled in someone’s garage. It certainly has made me question what I’m doing with my down time.

I’m tremendously excited about this library. I have a few more jets lined up before I will start pulling everything together, but this bike is definitely one of the more unusual items in the forthcoming collection.