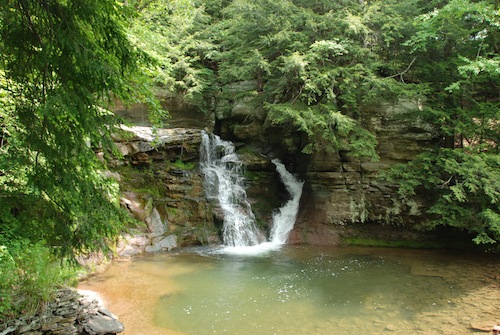 The Missus and I had long standing plans with her cousin to go to Prattsville, NY last weekend. We thought it was perfect timing, since people on the east coast of the US were bracing themselves for the arrival of Hurricane Irene: we can get out of New York City and head inland to avoid the storm.  Well, we were wrong about that:

This is how that waterfall normally looks

The damage to Prattsville, and surrounding towns has been devastating, and with FEMA now present, we can only hope that those hardest hit by the storm can get the help that they need. During the storm we were evacuated to higher ground and one of the only sources of information for days was a local online news source called The Watershed Post. Except for a few articles in major newspapers,  it is still the only way to get  up-to-date information on the various communities in the Catskills affected by the storm.

The Watershed Post also has listings  on where you can donate to the relief efforts, so please check it out.

Recording Geek Note: Under the Wife’s cousin’s jacket is a PCM-M10 with a Sound Devices MP-2. If you look closely at my ears you’ll also see DPA-4060s with the little furry rycote covers on them. I replaced that audio from the Canon S95 it was shot on.