How I Learned to Stop Worrying and Love M/S

This post comes from guest contributor, Charles Maynes. Charles is a talented Sound Designer, Editor, Recordist and all around decent fella.

As a child of the Cold War, I always loved the film Dr Strangelove, and now can mark off my bucket list my misuse of one of its most humorous tag-lines: “so with that said, in we go …”

I am going to need to give a little disclaimer, this little piece is an opinion piece, with little science attached to it. There is plenty of great writing out there as to the principles of Mid Side microphone techniques[1], and it isn’t my intention to add to the serious academic tone of those. There is no “answer” at the end of this. It is just a batch of information that will empower you to decide whether this is a good fit for the way you might want to do things.

As a sound designers, sound editors and sound effects recordists, we have all sorts of techniques and practices at our disposal. We use high sample rates and different bit depths. We also work in mono, stereo and multichannel formats. Usually, we are constrained by one condition or another, and many times we are simply constrained by time itself. In the field and in the studio, working with stereo signals we usually are most comfortable with Left, and Right channel audio. The reasons for this are pretty simple: most people with any sort of audio skills are usually very comfortable working in that format. And to be stating the obvious, our reproduction systems pretty much demand that. When we look at more esoteric formats like M/S, double M/S, B-Format and discreet surround, as the Holophone class of microphones provide, we are quickly swimming in a sea of options which may or may not make our creative work more efficient. Since I am discussing the basic Mid Side technique, I will hit the pros and cons as bullet points, which I will address in greater detail:

I am sure there may be other pro’s and con’s, but those are my pet favorites. Now to dig into the list!

Now to the negatives….

I have to say that I have moved from being anti-M/S (due to the reasons above) since getting my Oktava setup up and running. I have worked with a few M/S rigs and found them not particularly compelling, but the Oktavas are making me very happy about what can be done with the technique. 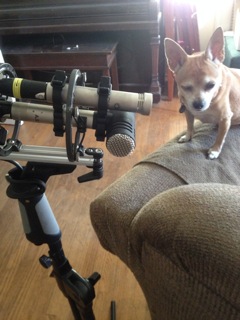 I love mics and I love stereo. I regularly use lots of neat and lovely stereo mics. The Sanken CSS5 is probably my “desert Island” mic. The SASS gives a type of binaural effect which can be very nice, and lastly my old, but still appreciated Shure VP–88, which sort of steered me away from M/S in the first place.

Now you are probably thinking that with the most popular M/S setups being either the Sennheiser MKH range, or the Schoeps which are certainly an industry standard, how did I end up with the Oktava rig? Well, I have to say it was an odd twist of fate for the most part. I read Tim Nielsen’s great articles on Designing Sound and focused my attention back on the M/S world, and then some collaborators I know, Zach Seivers and Justin Davies quizzed me on the notion of M/S recording. They were both looking to get Schoeps rigs for a film they were starting on and I spent some time going over the pros and cons, much of which I have already mentioned here, and let them sort the idea out for themselves. As it turned out, they both thought that the added effort was worth it, which pushed me towards putting together another MS rig myself. The Shure VP88, is an M/S mic with a built in decoder to provide a stereo or discrete output, but for whatever reason, I really never got great stuff from it (with the exception of discovering it to be an awesome mic for drum overhead). I thought I needed to rethink things, and look into options that worked with mics I already had.

My favorite small diaphragm condensers I had were the RODE NT–6’s and the Oktava MK 012’s. Each performed well, but largely were utility mics for me so as I continued considering different options, I came across an announcement from Oktava that they were doing a figure of 8 adaptor for the MK012’s. I had 3 of them already, and a good collection of capsules I thought this would be a not too expensive way to go. After getting it finally from the distributor, and rigging it up sort of awkwardly in a RODE blimp I noticed a lot of things which I didn’t really like. The mics were awkward to get a stable mount for using bongo ties and cut pieces of foam. This was remedied cheaply by the Rycote stack clips, which secured the two mics perfectly. Now the second issue seemed a little more difficult to deal with, and that was running two mic cables into the blimp and not having an ocean of bumps and other distortions if I dared move the blimp. Obviously, this was unacceptable. 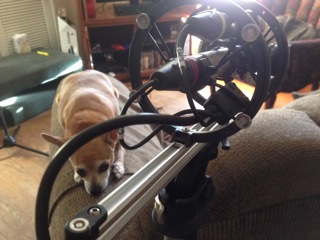 I remembered another friend, Tom Hambleton mentioned the Rycote Connbox. I looked it up, and was disappointed that it seemed to be a simple device with a pretty big price tag for what it seemed to be. The one feature it had that I DID love was that it allowed  me to use 5 conductor mic cables as I did with the Sanken and Shure mics. I had recording gig to cover it and I finally popped for it. The results with the Connbox were really unbelievably good. All the cable noise was pretty much gone, and it was very clean and could be easily moved. In then end it is an amazing value, which I have no reservations saying is an awesome tool.

One thing that is very important to your sanity is carefully aligning the Mid and Side mics in your shock mount. I started with my Mid mic a little bit forward of the side capsules and had difficult in mastering figuring out the right amount of delay that was need to produce a correct stereo image after the fact, but it was certainly a good learning experience.

So with that, here are some sound example of the mics for you to peruse, and hopefully you can make a good decision if M/S is right for you.