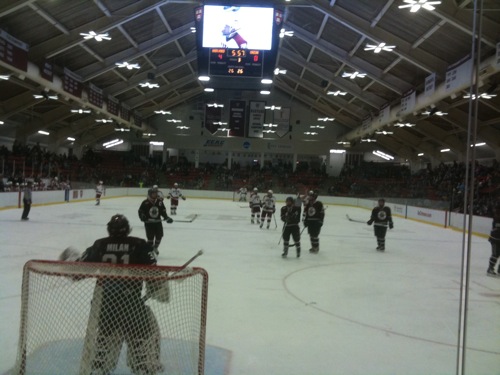 This past weekend I travelled up Boston with the Missus to visit some family.  After a mellow morning and afternoon, we ended up at a Harvard hockey game with my recording equipment.  The fans at the game ranged from die hards to students who didn’t seem to have much to do on Saturday night.  Harvard was playing Union College and jumped out to an early lead, and held on to win 4-3 in regulation.  I have to admit that I am a big hockey fan, but I had never been to a college hockey game.  It was pretty competitive and, for such a modest crowd, the fans managed to get pretty boisterous.

Recording Geek Note:  Rig consists of a pair of DPA 4060 mounted stealthily on either side of a backpack in the second row of seats.  It was all tracked to a Sony PCM-M10, with Sound Devices MP2 as a front end while trying to avoid running into the glass.