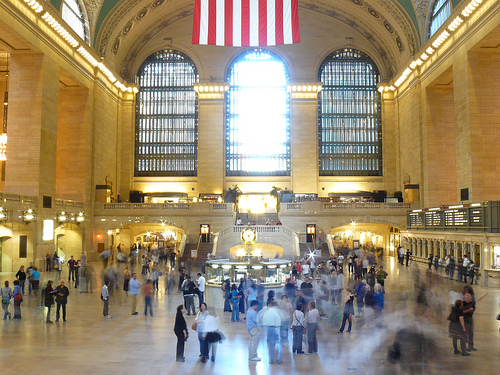 A few weeks ago I had a meeting in midtown Manhattan at Grand Central Terminal. Grand Central Terminal is one of those iconic New York buildings that tourists and commuters flow in and out of every day without stopping to take a listen or a look around. It is a gorgeous building that went through a major restoration in the 1990s and should be explored repeatedly. I’ve lived in New York twice and I still don’t feel like I know the building at all.

I made it to my meeting early so I decided to do some recording. I planted myself along a wall near one of the larger stairwells and just relaxed for a little while. The first thing that is immediately striking is how reflective the space is. Since the Terminal is cavernous and covered in hard surfaces, it is not surprising, but always striking.

Recording Geek Note: Recorded with DPA 4060’s head-mounted with the stereo image narrowed a fair bit in post. It was tracked to a Sony PCM-M10 with a Sound Devices MP-2 as a front-end.