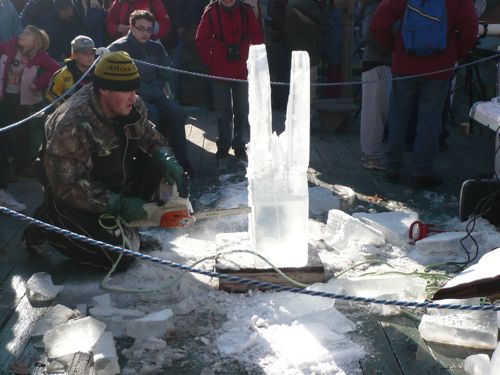 Back in January, I posted a recording of a guy taking a chainsaw to a log . . .  and an hour or so later there was a big wooden eagle for everyone to see.  On that same day, there was another guy with a chainsaw carving an eagle out of a block of ice.

Unfortunately for our ice sculpting friend, it was unseasonably warm that day; his eagle kept falling apart and ice was melting all around him.  Before long, he was working in a puddle of water.  I had been recording for a few minutes when I realized he was working with an electric saw and he seemed to have every electric tool possible!  I didn’t think that was such a smart move for a guy working with melting ice. 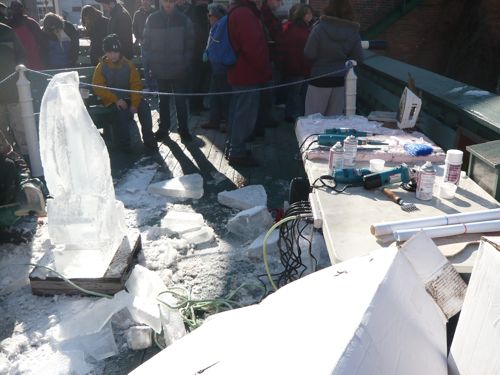 I didn’t stick around to see him finish, but the word on the street is that he managed to finish without getting electrocuted.  In terms of the sound, the electric chainsaw is a bit more subdued and consistent than its gas-guzzling cousin.  The only bummer was the crowd around him overlapping my recording.  Regardless, it is a fun recording and I’m glad he is still living.

Recording Geek Note:  Rig consists of Schoeps CMC5 setup for MS, with the MK4 as the mid.  It was all tracked to a Sony PCM-M10, with Sound Devices MP2 as a front end while trying to avoid getting electrocuted.