Do You Have a Rooftop? 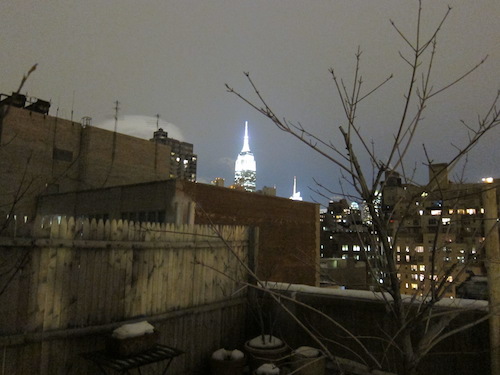 Lately, I’ve been spending days and nights on rooftops all over NYC for a collection of surround recordings from up high.

One of my favorite locations this far is a rooftop on 20th and 2nd avenue. This location came with a lovely view of the Empire State Building, and, if it hadn’t been for the temperature, I could have stayed out there for hours. 15° Fahrenheit isn’t always the most conducive climate for sightseeing, but this night was special. The skies were clear, the Empire State Building was lit up in classic white, brakes were squealing, and the firetrucks were out. I was in heaven. Here’s a little sample.

I’ve been making these recordings in quad using Schoeps MK4’s in a double ORTF configuration. I’ve also been dragging around my Cooper CS104 as a front end for my Sound Devices 744T.[1]

I’ll come out and say it, none of this is convenient. My kit involves a bag with the Cooper and Sound Devices, a Pelican 1510, and all the other little fiddly bits go in a backpack. The looks I get when I drag this morass of stuff on a packed subway train are priceless.

This process also involves a fair amount of goodwill from my New York friends and colleagues. Thankfully, my New York friends and colleagues have been willing to indulge me.[2] I’d go as far as to say that I have been extremely lucky. Two rooftop visits included meals and another included cocktails. I don’t know if folks are taking pity on me or if I look that harried, but those rice cakes I had with that almond butter were more delicious than expected.

I am still on the hunt for more rooftops in NYC, so if you live in any of the 5 boroughs and have roof access (or know someone who does), and would like me to document the sound of your roof for posterity, drop me a line. Please know that snacks and cocktails are not required.