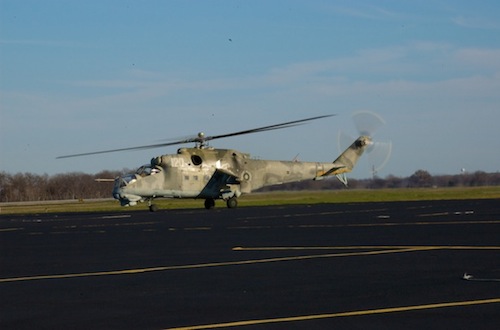 I recently released a sound effects library which features recordings of the Soviet-era Mi-24 Hind Attack Helicopter. While everything about that experience was thrilling and ridiculously fun, I want to focus on something very specific on the blog.

If you want to read all of about the crazy helicopter experience in total you can do so over Rabbit Ears Audio.

Among the more unique switches were the breaker switches. The aircraft had quite a number of break switches and there was one large switch where all of the breakers could be switched on a once.

When we set out to record this aircraft I was concerned that we wouldn’t have enough time to get all of the switches done, and boy am I glad that we managed it. The interior of HIND is filled with such character. And don’t forget about the inverters on this bad boy:

Recording Geek Note: Rig consists of Schoeps CMC5′s setup for MS, with the MK4 as the mid. It was all tracked to a Sound Devices 744T at 24/96. The inverter was recorded with an MKH 8060.