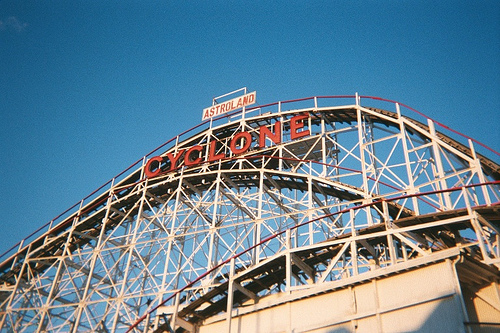 Lately, I have been toying around with my tiny DPA 4060 microphones. I’ve been trying to find interesting places to mount them to record a variety of sources in order to get a better feel for them. I’ve owned them for a few years now but I’ve never really pushed them all that hard, so I’ve been trying to make a conscious effort to get out and record more.

It’s almost summer in New York City and a lot of folks here consider Coney Island a great escape.  I wanted to record a couple of  pass-by’s of the famous Coney Island Cyclone before it got really crazy out there.  In just a few weeks the ambience will be filled with crazy amounts of music blasting from all over, so I decided that a mellow weekday was good time to try to capture the rattling and creaking of the historic 1920s roller coaster.

I was happy to record it, but I am never getting on that damn thing. Would you?

Recording Geek Note:  I stood alongside the coaster with the DPA’s head-mounted and slowly tracked the movement of the coaster with my head. It was tracked to a Sony PCM-M10 with a Sound Devices MP-2 as a front-end.