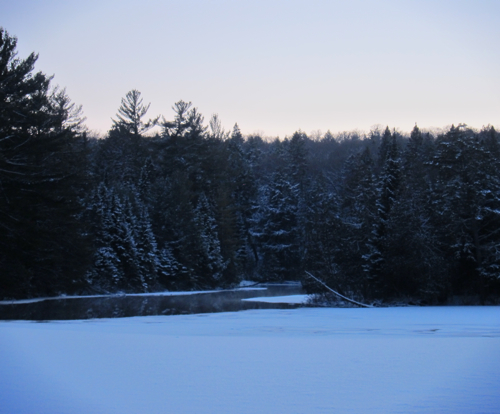 Sometimes, we need all need a bit of help. Cold weather and gear often demands lots of it. To date, I have gone recording in Vermont, Upstate NY, Minnesota, and, most recently, in Canada.

In order to find quiet locations I have been poring over maps and air traffic data. After a fair amount of research I settled on Algonquin Park in Northern Ontario. There is limited air traffic over the park and I knew the park wouldn’t be packed with visitors in the dead of winter.

Happily, I have a pal in Toronto, and I was able to talk John Loranger into tagging along on the trip. John picked me up on a Friday from YYZ[1] and we headed out to the semi-frozen north.[2]

The following recording is from a location that was about 300ft from a half frozen lake, and between several large pines.

I love how the distant ice crack and the subtle creaks from the trees add to the sense of cold. After three full days in Algonquin we only heard four planes. I was hoping for a moose to drop by where we were recording, but it wasn’t meant to be.

I have been extremely fortunate to have travel companions while out in the freezing cold. Algonquin is incredibly wild in the winter and most of its roads are left uncleared. We would not have been able to get to most of the locations if it wasn’t for John’s four-wheel drive truck. 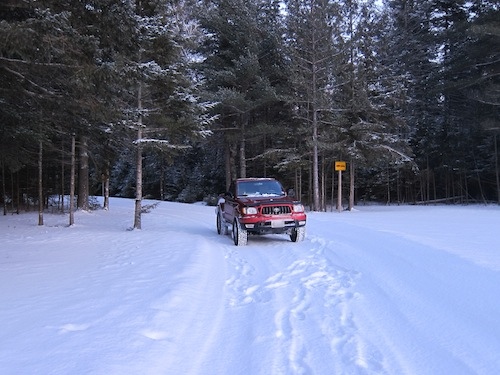 I was also recently in Minnesota doing some recording and I would not have been able to do 90% of it without the help of my good friend Rob Byers. We spent days traversing snow-covered roads that were more than a little challenging.

Rob also just received a shipment with a healthy chunk of my gear. He is currently traveling to remote northern Minnesota where he will have to ski to a cabin. Rob was generous enough to suggest that he could do some recording for me while up north. Last week, I packed up my pelican cases and off they went. (thank goodness for insurance). I’m really looking forward to hearing what sounds come back to me.

I’m truly lucky to have great friends and colleagues in cold places these days.[3]