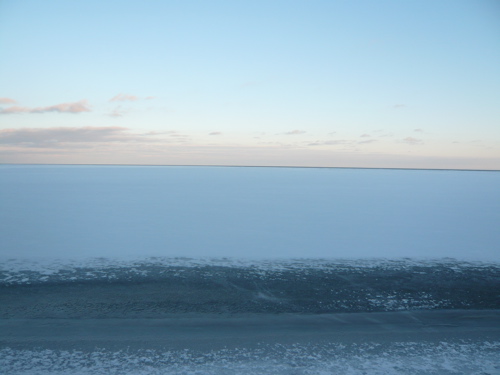 Lately I have had some real trouble recording Owls.  They are not like songbirds where they just pop out of trees and announce their presence.  Raptors, on the other hand, are pretty sneaky, they hide out in trees and pounce on their prey like greased lightning.  After three weekends out between 1:00 – 5:00 AM trying to record Great Horned Owls I have let them go. . .  for now.

Once I let go of the search for Owls, I realized that I needed a vacation in a bad way.  I headed to Two Harbors, MN with my wife and a couple of good friends.  We rented a cabin right on the shore of Lake Superior (“some call it Gitche Gumee”) and it was truly beautiful.

Lake Superior was iced over from the shore to about 400 yards out.  The lake is too large to freeze completely but if the conditions are right it can freeze over 60%.  There have been rare occasions where the lake has frozen over 90%, which means someone is not going to get their shipment of taconite pellets.  One of the more beautiful occurrences along the edge of the water was the spiking up of ice formations that look like quartz crystals.  As the temperature dropped late in the evening the frozen parts of the lake contracted, making remarkable groaning, cracking, and pinging sounds that sounded just like an analog synth.

With the help of my good friend Dave and my trusty headlamp, I set my recording gear out on the edge of the ice and waited for the temperature to drop and for the heavy duty sounds to commence.  It was so quiet and cold that night, I could hear the wind blowing snow across the surface of the ice.  I was very concerned about how the gear would stand up to the low temperatures.  At its warmest it was 3°F!!  To help deal with potential condensation on the Schoeps, I set the zeppelin outside for several hours before I started recording with the hope that the mics would get adjusted to the cold temps.  They performed extremely well during 4 hours of recording.  At times Schoeps can be prone to clicks or pops in humid conditions or when condensation occurs.  It was cold and damp and they held up just fine.  The Sound Devices 744T was also a trooper in the cold. 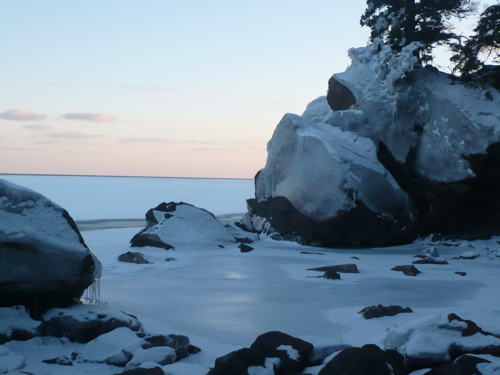 Frozen Waterfalls along the shore. 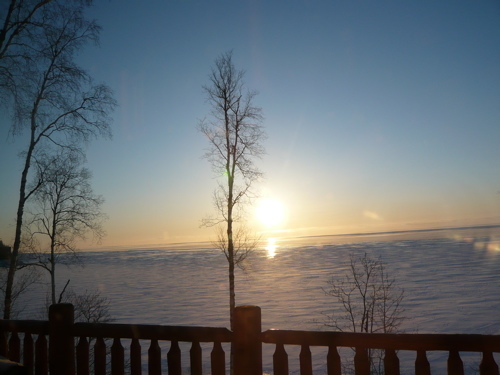 Sunrise from our cabin.