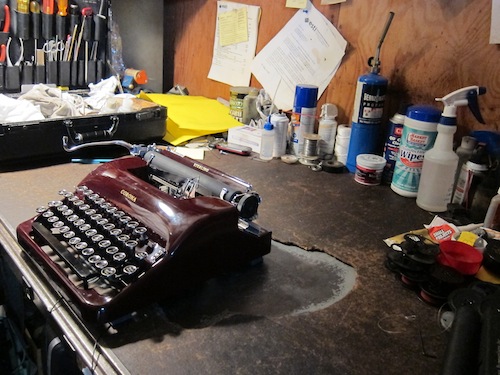 Two weekends ago I had the pleasure of recording a series of antique typewriters. One of my closest pals is moving to the UK and while he is waiting on his visa, he is still stuck in Boston area. When I was planning my last visit before my pal’s departure, I started exploring recording opportunities. It was around that time when I discovered Tom Furrier’s work a Cambridge Typewriter.

Tom has been working in the Typewriter business for over 30 years and was willing to have us drop by the shop and record several machines. I was immediately taken with the 1939 Corona that he pulled out of his personal collection – as soon as it was removed from the leather case I knew we had to record it. Tom’s restoration of this Corona was so phenomenally clean it looked as if it had just walked itself off the showroom floor.

We mounted a Schoeps MS pair right above the typewriter:

A DPA 4060 under the middle of the typewriter and typebars:

Each perspective offered a unique take on this beautiful machine.

By the time the day was done we had spent over 6 hours in Cambridge Typewriter and we recorded eight typewriters. We managed to record a Royal 10, Woodstock Standard, Olivetti Lettera 22, Corona Sterling, Smith Corona Classic 12, Royal Companion, and an IBM Selectric. It was a ridiculously humid and after that day Tom officially has earned the status of mensch. Tom dutifully typed a variety sequences for us and imparted tons of useful information about each machine.

Tom’s spirit and passion for his craft is absolutely infectious. If you are ever in the Boston area, I highly recommend you visit Tom at Cambridge Typewriter. If you can’t travel to north east you can also keep track of Tom over at his blog.