The other day, I took a ride onto the Brooklyn Bridge on my road bike to record some ambience.  The Brooklyn Bridge has a wooden walkway that sits above the vehicular traffic and is subdivided into two parts: one side is for pedestrians and the other is for cyclists.  I’m a cyclist and  I think that, when it comes to bridges in New York, the Brooklyn Bridge is a bit of a death trap.  It is full of tourists admiring the view who constantly walk into the bike lane.  But, alas, this post is not an inditment of pedestrians.  It is about the sound of the bridge.

I planted myself in front of a bridge support so that I could record the sound of bikes passing on the right, pedestrians passing on the left, cars below, as well as whatever else came my way. 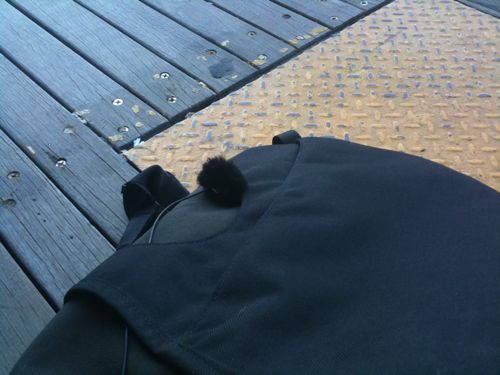 I went out with my compact rig, which consists of a pair of DPA 4060s powered by a Sound Devices MP-2 tracked to a Sony PCM-M10.  It is small enough to be discreet and not draw too much attention.

The DPAs have a surprising amount of low end, and I am consistently impressed with what those little guys can do.  If you listen closely, you can hear the constant creaking of the bridge, occasional voices, and the familiar sound of a bicycle bell warning the wayward tourists.

Recording Geek Note:  Rig consists of a pair of DPA 4060s mounted stealthily on either side of a backpack on top of the Brooklyn Bridge.  It was all tracked to a Sony PCM-M10, with Sound Devices MP2 as a front end.