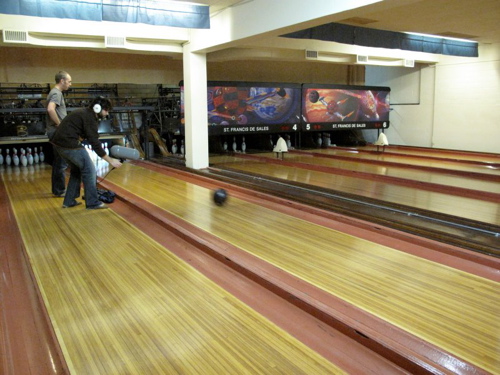 I am currently in the midst of a move from the midwest back to the east coast.  I suspect that you might be hearing more sounds from that area on the blog in the near future.  Moves mean lots of farewells and goodbyes to friends, who, in my case, always seem willing to indulge my desire to record strange things.  Recently, a group of friends rented out an entire bowling alley in the basement of a an old school as a bit of a going-away shindig and I got the chance to record before everyone arrived.

The owner of the alley was very gracious and allowed my friend and me  to walk on the lanes and place mics in key positions.  First we set up my DPA 4060s with their boundary layer attachments on either side of the pin so they could pick up the pins falling and the machinery behind the lane.  I also tracked the ball with my MS rig, which consists of a Schoeps MK4 and MK8.  All 4 mics were tracked to a Sound Devices 744T at 24/96. 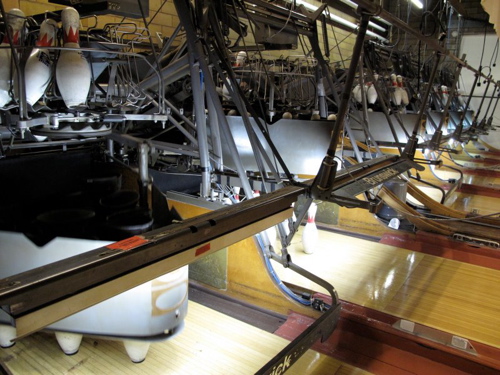 One of the added bonuses of this session was all of the great machine sound from the pinsetter mechanism.  If you look closely at the image to the right you can seen that the machinery used to reset the pins is far from modern.  Instead of the pins resetting very quickly like most modern lanes, these pins have to slide into a circular mechanism and then drop into place.   You can hear the pins being pushed around and ultimately falling into the metal basket before they are reset on the lane.  My only regret is that I didn’t get the chance to focus on the machine a bit more, but with only 30 minutes to set up, record, and clean up before the part guests arrived, I am pretty happy with the results.

After some searching around youtube it appears the mechanism I recorded was the Brunswick A-2 pinsetter, first introduced in the 1960s.

The video above makes the whole operation seem like a sequence out of Top Gun, but trust me it is far from it. The pins are the only thing close to a “danger zone.”  Just imagine if Brunswick could have hired Tony Scott to direct the training video.